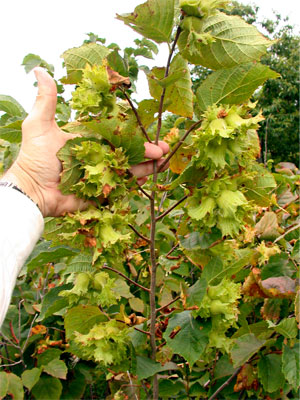 Badgersett Research Corporation (BRC), announces 3 major breakthroughs in sustainable biodiesel production this year: Proof of Principle for their unique breeding process; a Low-Tech Cloning process so farmers can clone their own best plants, and the addition of a third crop option from their work; and new Hybrid Pecan/Hickories.
They will be showing them off at their upcoming Annual Field Day; Sat. Aug. 18, at their southern Minnesota breeding facility, Badgersett Farm. A major feature of the field day will be the first time anywhere pressing of hazelnuts grown in the upper Midwest for biodiesel. They are intending to press oil on site, and actually run a diesel engine with the product. And they'll be using the co-product immediately, too—offering the oilcake right there to live chickens...

RAIN NOTICE Liklihood of some rain on the field day is quite high, check this link for the latest details

Badgersett Research Corporation (BRC), a small startup from Minnesota, has a new contender for sustainable bio-fuels : "NeoHybrid Hazelnuts". Like most "overnight" sensations, this crop has been in development a long time—30 years in this case.

"We've been quietly working on all the pieces for this system for decades. We now have ALL the pieces." says Philip A. Rutter, CEO and Chief Scientist of BRC. "And we've just reached another critical milestone: in a few days, we're going to actually press oil from hazelnuts grown in Minnesota and run a diesel engine with that oil. The public is welcome to come and see. In fact we may put you to work, cracking nuts for the press..." he adds with a grin.

Dr. Paul Porter, U of MN, will be bringing the on-farm oil press he has been developing to the BRC Annual Field Day, Saturday Aug. 18. Badgersett NeoHybrid hazelnuts will be pressed in several ways, including whole nuts, shell and all. "Clearly, the oil and cake will be better and more valuable when we can just press kernels—but even shell and all, it should work." he says. Birds are the best candidates for this kind of oil-cake, says Rutter; "Birds normally swalow seeds like this whole, then grind them up in their gizzards. Their digestive systems have to be used to nutshell dust. So we'll be feeding some of the fresh oil-cake right to chickens at the Field Day. Nut-fed chicken, anyone? And what happens to the chemistry of eggs from birds fed such high quality feed? We'll find out."

BRC has measured several of its NeoHybrids as having crop production potential nearly 300% that of soybeans, in terms of oil. "That's just huge!" says Rutter. "Soybean growers would throw parties if they could get a reliable 10% yield increase. We're at 300%!!"

Badgersett hazel oil is essentially the exact twin of olive oil, chemically, according to student research done at the Northern Alberta Institute of Technology—excellent for food, and excellent for industrial chemical feedstock.
Mr. Rutter states "In terms of sustainability, nothing else really comes close to these new hazels. You never plow after they're established, and not one molecule of fertilizer can escape their huge root systems. They provide year-round complex habitat for wildlife, and so far we use no pesticides at all. But we do need folks to understand this is still a crop in its infancy, for all that it's 30 years old. It's true perennial agriculture. And boy, is it different from row crops. Growers need to learn 'how to', for just about every aspect." Rutter estimates that there are currently some 200 serious growers of the NeoHybrids, with between 2 to 20 acres each, in ten states. "That sounds small, until you think how far it is from zero, which is where we were 10 years ago. Plus, there's another 1,000 or so who are 'thinking about it'. We've got so many interested folks we don't dare answer the phone—we'd never get to do anything else."

"It's also worth noting that this is NOT like all those biotech announcements that state 'we think this technology will be working in about 5 years.' This technology is working NOW. And we're scaling up, as fast as we can." Badgersett Research, privately offered, is raising capital for across the board expansion. "Personnel, plantings, and production" is the current corporate mantra, according to Rutter. "We don't need more 'proof'—we've got it, in spades. And investment-wise—you've heard of being in the right place at the right time?"

There are three breakthroughs to report this year: the proof of principle of the genetic techniques being used; the related addition of the NeoHybrid hickory/pecan crop to the battery of potential crops ready for use, and the development of a low-tech cloning technique for the hazels so any farmer can now clone their own best plants.
Breakthrough One came in the area of Genetics, where BRC's third NeoHybrid crop, a mixture of 4 species of pecans and hickories, matured to the point were conclusions can be drawn. "After analysis, over 95% of our new hickory pecans are very thin shelled; extremely cold hardy- and some bear ANNUAL crops (a major problem in the pecan industry). You cannot get results like that from traditional breeding; nor from genetic engineering. Can't.", Rutter states.

"Our breeding process is so different from 'traditional' that we've been forced to come up with a new name for it. It's Accelerated Guided Evolution; AGE. And it's complex. Essentially it's an adaptation of a natural process called a 'hybrid swarm' - a phrase known to only a few specialized evolutionary geneticists. Basically, it's really nature's way for species to deal with Global Warming - when climates change, species that never used to see each other come into contact- and hybridize. We get new species this way." Rutter states the new breeding technique is: "Powerful. Maybe more powerful then genetic engineering. Particularly since - the AGE process WORKS. When you've got one NeoHybrid crop that works- that's interesting, but maybe just dumb luck. When you've got two- people start to pay attention. When you've got THREE; and all three exhibit useful characteristics achieved nowhere else; stuff like disease resistance, increased productivity- that's proof." Rutter grins again.

"The breakthrough process is Accelerated Guided Evolution, AGE. The breakthrough outcome is a NeoHybrid crop. NeoHybrids are utterly different, at the genomic level, from hybrid corn. Both kinds of hybrids have huge advantages, but they're as different, technically speaking, as algebra from calculus. Just not the same thing." Rutter should know; as the past Founding President of The American Chestnut Foundation, which deals with yet another kind of hybridization. "AGE is absolutely NOT standard breeding; it entails complex, specific processes developed over 30 years based on hybrid swarms. As the acronym suggests; it takes time; patience, and very large numbers of hybrids being tested. Nothing else will work."

One of the more important ramifications to the AGE process is that it generates gene pools of the crop with "staggering genetic diversity. Orders of magnitude bigger than other processes- it's mathematically calculable." according to Rutter. "And it turns out we just happen to need huge genetic diversity right now- to cope with global warming. All of the genes in our NeoHybrid hazels are - hazelnut genes. But they come from 3 very different species- so the number of new and unprecedented combinations that pop up; if you're doing this right, is amazing."

Another aspect, critically important according to Rutter, is these new crops are "reality based- not fantasies created for fundraising purposes. Only after decades of survival and top performance in the field do we take these plants seriously, and carry them forward to the next generation. In this day, as the biotech investors know to their sorrow, it's very easy to have a short-term laboratory success that cannot translate to real world, warts-and-all functionality." Rutter's demeanor when discussing long-term vs. short term benefits is not his normal careful optimism. "I've come to realize that 'short term benefit' always means- long term disaster. Always. AGE selection takes a long time. And looks pretty warty, quite often. But - it WORKS. In the long term. That's a lot cheaper, and more efficient, it turns out, than fast, flashy, failure." 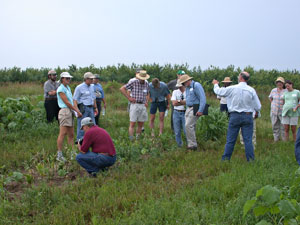 A tour group led by Philip Rutter examines a hazel row in the first year of establishment. 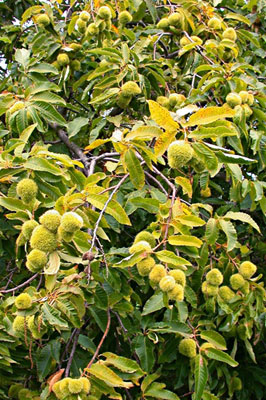 An example of the size, variety and quality of Badgersett's chestnuts. 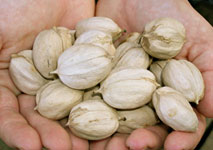 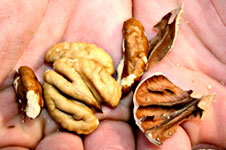 Many of the pecan/hickory NeoHybrids at BRC have extremely thin shells and large nutmeats such as this.